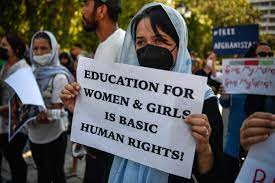 A short time ago, activist, artist and former Afghan refugee, Nahid Shahalimi, had a win. The all-women’s school she has been working to establish in Afghanistan was approved by the current Afghan government— the Taliban.

Shahalimi has been working on the project for nearly six years, even before the Taliban arrived on the streets of Kabul in August. When the takeover occurred, Shahalimi was initially concerned about getting the most at-risk people out of the country— public activists, outspoken women’s rights workers and people with close connections to the West.

But today, with the Taliban flag flying over Kabul, her goals have shifted. “We cannot evacuate half of the population of the country,” she says, “That is not a realistic thing…what can we do is to make life better for that twenty-year-old who doesn’t know the real Taliban; who only knows it from TV and history books.”

For a young adult woman currently living in Kabul, the Taliban has seemed more like a relic of the past than a pressing threat. Since 2001, millions of girls have enrolled in schools and adult women have engaged in the workforce and public life in ways they were prohibited from doing during the previous Taliban regime. The typical twenty-year-old Kabul woman is therefore now experiencing life under a strict Islamic Sharia regime for the first time. “It is going to be devastating, especially for the young people,” Shahalimi says “And we will mourn. But while we’re mourning, we also have to be realistic about how we are going to proceed after this.”

For Shahalimi, being ‘realistic’ translates into taking actions that will result in real effects. She urges people who are trying to help to put their energy and resources in places they know will have an impact— which does not include sending money to organizations where donations cannot be tracked. “Most of these NGOs [sending money to Afghans] are being assessed by the Taliban,” Shahalimi says, “Every single one of them is going to go through paperwork that will determine whether that is suitable for the new regime or whether it is too Westernized for this new regime.” With banks only just reopening after a full week of closures, she says it is unlikely that the money being sent is actually reaching the intended recipients.

When she launched her idea for this school (whose name and details she could not reveal for security reasons), Shahalimi wanted to ensure that it would be able to survive under a Taliban regime. At the time, Afghanistan was not under Taliban rule, but Shahalimi knew this might change, quickly. (Though the Taliban was forced to scatter in 2001, they have been regathering and regaining power over the past two decades.) Signs of their growing influence has been increasingly evident in recent years— when girls’ enrollment in school dropped drastically after 2014, and in 2020 when there was a 45% increase in civilian casualties in Afghanistan, including a 13% increase in the number of women killed that year.

Shahalimi recognized this trend, and acted accordingly. “I wanted to make sure that we were making something that, when the day comes and [the Taliban] walks into the country, they will allow it because it is under that cultural umbrella,” she says. Taliban law prohibits mixed gender work or study, so an all-female school should be acceptable.

Essentially, Shahalimi is working with, rather than against, the Taliban to best support women’s rights. Her decision to do so is based on a blunt understanding of the current reality; the war against the Taliban has been lost. Women and girls in Afghanistan are going to lose many more rights that they have comfortably held for twenty years. “That’s something that we all have to accept,” she says.

Although she is resigned to this, she is not demoralized by it.

In the past few weeks, Shahalimi has been in communication with academic institutions working to keep these young women in schools. Afghanistan-based universities are reorganizing classrooms in order to accommodate gender segregation, per Taliban law. Already single-gender, all-female schools and universities have been allowed to keep running. Shahalimi knows that life for these students will not be the same, but she is hopeful that some of the progress made in the past twenty years can be sustained. “If you want [the Taliban] to accept and come to terms with what you want them to understand, you have to speak the same language,” she says, “We’re speaking to fish about land!”

This comparison refers to what Shahalimi describes as the Taliban’s basic inability, or unwillingness, to comprehend human rights and equality in the ways the West understands them. She does not believe that the fight lies in convincing them of progressive ideals; the fight is to get the best outcome for those directly impacted by Taliban rule. She therefore isn’t fighting for a co-ed school that teaches students feminist history; she is instead fighting— and succeeding — in creating a school that aligns with Taliban’s standards or, at the very least, won’t directly oppose them.

Women today are an integral part of the Afghani economy and society, and the Taliban won’t be able to just put that reality aside, Shahalimi says:

“Winning a war, and winning a country is one thing— running the country is another. They need these young people and they need these women to go to their jobs [e.g. women police officers]…and they have been saying that. And from what I have been hearing on the ground, they have kept their promise so far.”

Although the Taliban has thus far assured news outlets that the rights of women and girls will not be under threat, the reality on the ground suggests otherwise. Women are being turned away from universities they have attended for years, and are being beaten for not providing food for Taliban soldiers. Public images of women wearing makeup have been painted over or torn down, and many taxi drivers are now refusing to take women in their cars. Some women with prominent social media presences are also being forced to go into hiding.

The global significance of the situation is not lost on Shahalimi, who was forced to flee Afghanistan when she was a child, back in the 80s. She has since devoted her life to fighting for humanitarian efforts worldwide, while pushing for the rights of women and girls wherever possible. For her, the Taliban’s rise to power fits into many other human rights challenges occurring across the globe. “Some white man sat down on the decision-making table and decided that this deal is going to happen at the cost of women and minorities,” Shahalimi says. “It’s the same thing— abortion laws, Poland, minority laws— everything is connected to each other. That is why Afghanistan is so important.”

“Speaking to fish about land” is not about turning those fish into birds; it’s about finding a way to talk about the sky to someone who has never seen it. Although the Taliban will not entertain an idea that is blatantly Western, feminist, or loudly progressive, Shahalimi is not letting go of these ideals, by prioritizing the programs and actions that have a chance at survival. This is how she hopes to protect women in Afghanistan today.

Click on the image below to watch the 25-minute interview on the Women’s eNews podcast: