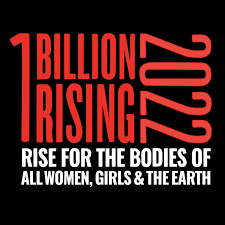 One Billion Rising, an initiative of V-Day, has announced the ONE BILLION RISING 2022 theme and campaign: RISE for the Bodies of All Women, Girls & the Earth. The campaign addresses the devastating consequences of the ongoing vicious systems of patriarchy, imperialism, capitalism and racism in the world today and the destructive battle for power fought over women’s bodies and the body of the earth.

Created by a community of more than 45 One Billion Rising global coordinators, this year’s campaign urges communities worldwide to utilize art and activism, creative resistance events and gatherings, both online and offline, to demand an end to violence against women, girls and the planet and to shine a light on the rampant impunity and injustice that survivors most often face.

One Billion Rising, which originally launched on Valentine’s Day 2013, began as a call to action based on the staggering statistic that 1 in 3 women on the planet will be beaten or raped during her lifetime, equaling more than one billion women and girls based on the current global population. In the eight years since, One Billion Rising activists – led by the global coordinators –  have unleashed vast grassroots, anti-violence actions locally, nationally and globally. This visionary work has been survivor-led and focused, all the while revealing the power of art and activism to change culture and systems.

With activists in over 70 countries planning to Rise in 2022, this is a snapshot of the hundreds of events planned. In Eswatini, organizers, in partnership with Visuals Communication Pty Ltd., developed a new short film for the deaf to break barriers of communication and engage with everyone on issues aimed at ending violence against women and girls in Eswatini. One Billion Rising Portugal is organizing a 3-hour ecstatic sacred temple dance event with a ceremony honoring Mother Earth and women’s bodies. In Italy, Covid restrictions prevent in person events so organizers will gather over Zoom on February 13th in an event featuring men rising to end violence against women and girls, including the Mayor of Rome, Roberto Gualtieri. In Tucson, Arizona, Esperanza Dance Project will host a Valentine’s Day flash mob where community members are invited to share poem and personal statements, facilitating a safe, healing space to collectively resist against global sexual violence. On Second Life, a four-region stage with art installations, live music, poetry and dramatic productions will take place over a 24-hour period and poetry and dance events will be held at different times, enabling people all over the world to attend this virtual event no matter their time zone. In Ghana, Uganda, Sierra Leone, activities will focus on schools and education of children on abuse and how to take care of and protect their bodies. In Mexico City, an art exhibition at the Mexico City Theater will feature female artists and poets, as well as an exclusive photo installation displaying and honoring the naked bodies of the female doctors who have been working on the frontlines in response to Covid. In the Philippines, a Rising with dance, poetry, and other cultural activities will focus on pushing forward the Women’s Political Agenda preceding their national elections. OBR India will host a global event on the issue of caste matters, amidst numerous community events across the country including a traditional food festival. And globally, on February 14th at 1pm, “Rejoice and Rise 2022, A Body Love Uprising” hosted by V and Middlechurch’s Jacqueline Lewis, will take place on Zoom featuring poetry, readings on the body, music and more.

“This past year has seen global lockdowns, government neglect, health crises, proliferation of authoritarian regimes, endemic exploitation of labor, escalating corporate greed, worsening poverty, racism and exclusion, the grave ongoing destruction and pillaging of the environment for capital, as well as the deterioration of the climate. At the core of all of this is the injurious hold of patriarchy and misogyny ––on women’s rights and freedom. We have seen more rapes, more domestic violence, more abuse, more exploitation, more trafficking, more hunger and death, more political persecution, more restrictions on freedom and mobility, more forced migration, more femicide, more loss of reproductive rights, and more and more violence. The violence of discrimination, of exclusion, of poverty, of inequality, of occupation, of exploitation, of suppression, of displacement, of oppression, of control has been severe and unrelenting. In this 2022 campaign, we call on the world to hold Artistic Risings for the bodies of all women and for the ‘ultimate body’, our earth, to reclaim, express, defy, disrupt, unite, radicalize, awaken, revolutionize, and to create joy, hope and transformation.” – Monique Wilson, One Billion Rising Global Coordinator

“I think of all the women and girls I’ve met everywhere in this world who saw their body as a site for danger, a carrier of shame, a poisoned and charred landscape. Something to hide, to fix, to flatten, to hurt. This year we rise in One Billion Rising for the bodies of all women and the earth that they may move in the motion of light, that they may stand without apology or fear in their power and grace, that they may soar in freedom and release the energy the world so desperately needs.” – V (formerly Eve Ensler), playwright and Founder of One Billion Rising and V-Day

For more information about One Billion Rising and the 2022 campaign and global events, visit OneBillionRising.org

SERIES OF RISING VIDEO STATEMENTS FROM OBR COORDINATORS: Over the course of the campaign, short videos from One Billion Rising global coordinators will be released over social media to share and connect their work regionally with activists globally. These pieces inspire and uplift the work and make urgent the call to action of the 2022 global campaign.

Read about the 2022 theme: https://www.onebillionrising.org/about/campaign/

About V-Day: V-Day is a global activist movement to end violence against all women (cisgender, transgender, and gender non-conforming), girls and the planet. V-Day believes that when art and activism come together, they have the power to transform systems and change culture.

Activists look at the intersection of class, race, gender, environmental destruction, imperialism, militarism, patriarchy, poverty, and war, as women face abuse and exploitation across layers of systematic and societal oppression, with the most marginalized and excluded often facing increased levels of violence.

Founder V (formerly Eve Ensler)’s play The Vagina Monologues and other works have been performed across the world by local activists, survivors and artists, raising over $120 million dollars for grassroots anti-violence groups, rape crisis centers, domestic violence shelters, and safe houses, shattering taboos and changing the way activists make change in their communities.  Today, V-Day’s work includes the City of Joy, a revolutionary center for women survivors of gender violence in the Democratic Republic of Congo, which has graduated over 1700 women leaders; One Billion Rising, the largest mass action to demand an end to violence against women in history; and Voices, a new interdisciplinary performance arts project and campaign grounded in Black women’s stories by V-Day to unify the vision of ending violence against women: cis women, trans women, and non binary people across the African Continent and African Diaspora. V-Day, the City of Joy, One Billion Rising and Voices are a crucial part of the global fight to stop gender-based violence through attacking the silence — public and private — that allows violence against women to continue.