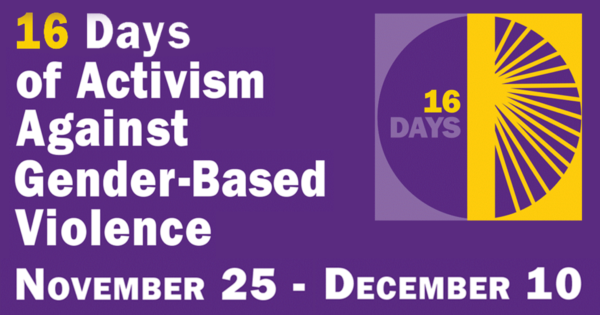 Every year, November 25 is marked as the International Day for the Elimination of Violence Against Women. And every year, December 10 is marked as Human Rights Day. The days in between – 16 of them to be exact – are the annual 16 days of activism against gender-based violence. They serve as a reminder that such violence continues to be a crucial battle in the fight for gender equality, and that women’s rights are human rights. Although the 16 days of activism are typically viewed as a fight for women and girls, they are also crucial for, and need to be inclusive of, LGBTIQ people. Especially now.

The World Health Organization estimates that 1 in 3 women and girls worldwide experience physical and/or sexual intimate partner violence at least once in their life. These levels have remained largely unchanged over the last decade, indicating that the issue continues to be far too prevalent. Over the last two years, since the start of the COVID-19 pandemic, gender based-violence has increased drastically, partly due to mass job losses, economic hardships, crumbling livelihoods and lockdown related containment in small spaces. For example, i?n China in February 2020 the number of domestic violence reports tripled, compared to February 2019.

When it comes to LGBTIQ people, OutRight documented that gender-based violence is the most common form of violence faced by LGBTIQ communities worldwide. The Center for Survivor Advocacy and Justice highlights that the rates of abuse increased dramatically to about 50% and higher for women and girls marginalized by race, ethnicity, sexual orientation, gender identity, citizenship status, and cognitive/physical ability. OutRight’s report “Vulnerability Amplified: The Impact of the COVID-19 Pandemic on LGBTIQ People” echoes this, showing rising rates of domestic and family violence in nearly every interview we conducted.

The pandemic has exacerbated other inequalities too, and reversed progress of gender and LGBTIQ equality. The UN estimates that 11 million girls may not return to school because of COVID-19, thereby increasing their risk of child marriage. The economic fallout is expected to push 47 million more women and girls into extreme poverty in 2021. LGBTIQ people continue facing amplified joblessness, barriers to accessing healthcare, and a far too frequent inability to access relief and recovery efforts which take a binary gendered view, or narrow definitions of family in distribution of aid.

This year’s 16 days of activism are rightly focusing on the fall-out from the pandemic, on the amplified levels of exclusion of women and girls, and the heightened rates of gender-based violence. The campaign entitled “Orange the World: END VIOLENCE AGAINST WOMEN NOW!” focuses on finding long-term sustainable solutions to not only tackle the general prevalence of gender-based violence, but to tackle its rising rates during times of crisis.

These efforts are important and needed. But to be successful they also need to be inclusive. The pandemic is a sobering reminder that without including everyone in recovery efforts, the pandemic will continue to wreak havoc on people’s lives. LGBTIQ exclusion is not an option if we ever want to come out of this crisis successfully. The same is true for tackling gender-based violence. Since the root causes of gender-based violence are the same for women and LGBTIQ people, any efforts to tackle this issue have to be inclusive of LGBTIQ and non-binary people, all of whom also fall victim to gender-based violence at alarmingly high rates.

The only way the long-term solutions of 16 days of activism will be successful is if they are explicitly inclusive of the needs and challenges faced by LGBTIQ people. The Sustainable Development Goals adopted by the UN in 2015 designed to achieve a better and more sustainable future make the call for the world to “Leave No One Behind”. That must include LGBTIQ people.