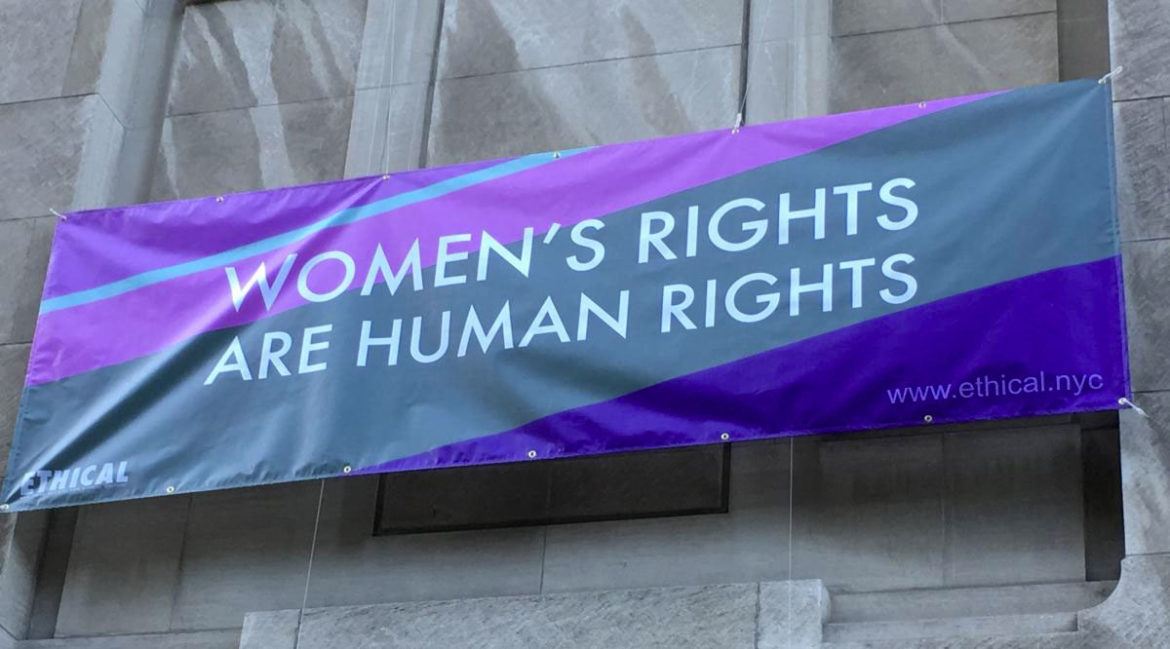 But it’s the COVID-19 pandemic, she says, that has been “one of the most, most challenging times that we’ve faced, I’ve faced.”

She points to the challenges of navigating through new safety procedures, reduced volume and employee furloughs, but also to the anti-abortion protestors screaming outside her Queens, NY, medical center. They’ve not only maintained their presence throughout the pandemic, but also doubled in numbers, armed with graphic posters but failing to wear Center for Disease Control-recommended face masks.

“Their attitude is that we’re vulnerable now and women are vulnerable so let’s harass and abuse them verbally even more,” Hoffman says.

It’s a tactic witnessed around the country. In the early weeks of the pandemic, the governments of several conservative states saw an opportunity to roll back women’s reproductive rights. Women were already proving to be disproportionately affected by the Coronavirus, with financial insecurity and lack of childcare topping the issues, when 12 states deemed abortion a “non-essential” or “elective” procedure. Some governors and attorneys general argued that it would seize the personal protective equipment (PPE) needed by medical professionals in hospitals. Others insisted that the procedure could be delayed.

Their arguments aren’t supported by medical evidence. A statement by the American College of Obstetricians and Gynecologists and six other prominent medical organizations refuted this claim, stressing that “abortion is an essential component of comprehensive health care” and should not be delayed.

“It is also a time-sensitive service for which a delay of several weeks, or in some cases days, may increase the risks or potentially make it completely inaccessible,” the statement read. “The consequences of being unable to obtain an abortion profoundly impact a person’s life, health, and well-being. …community-based and hospital-based clinicians should consider collaboration to ensure abortion access is not compromised during this time.”

However, abortion services in Alabama, Ohio, Oklahoma, Tennessee, Alaska, Iowa, Kentucky, West Virginia, Louisiana, Mississippi and Texas were still for banned for weeks. Arkansas’s ban has yet to be overturned. Unchallenged by her local government, Hoffman never closed Choices.

“It was immediately decided — I did anyway — that [we are] an essential service,” she says, “and there was no way I was closing down and would be in any way vulnerable to that kind of political playbook.”

Cindy Pearson, executive director of the National Women’s Health Network, noted that these states have a long history of digging for reasons to ban or limit abortions, calling the non-essential services mandate the latest excuse.

“It had nothing to do with COVID,” she argues. “I was disgusted at the depth to which they would go to stop women and people who can get pregnant from doing what they know is best for themselves and their families. It’s disgusting to see them use a word like pandemic as an excuse to once again try to restrict abortions.”

As Americans are urged to stay home to stop the spread of COVID-19, and more medical providers are turning to telemedicine appointments to see and treat patients, there is an option for those seeking abortions that meets today’s restrictions and concerns — so long as politics stay out of it. Rather than go to a clinic for a surgical abortion, a woman choosing to end her pregnancy can get a medical abortion by taking two Food and Drug Administration-approved pills to induce a miscarriage at home. The pills, mifepristone and misoprostol, have been available for 20 years, Pearson adds.

“It’s an option that’s safe, effective, and we do want more people to know about it,” she explains. “We know why people don’t, in part because it’s kind of hard to get. If something’s not widely available, you’re less likely to know about it.”

The FDA tied Risk Evaluation and Mitigation Strategies (REMS) — meant for medications that are unsafe in some way — to mifepristone, one that requires it be administered in person by a specially certified provider, despite being approved to be taken at home. Jamila Perritt, a physician, activist and abortion provider in Washington, D.C., says the restrictions, which depending on the state can include additional state-signed forms, an ultrasound and two visits with a waiting period in between, are not grounded in medical or scientific evidence. Without them, she says she could simply, easily and safely write a prescription and call it into a patient’s local pharmacy.

“The REMS that are tied to the abortion pill are not grounded in safety but in political ideology,” Perritt said. “It’s an attempt to restrict access to this medication in a way that doesn’t happen with any other medication. It’s singled out and treated differently simply because it’s used to provide abortion services.”

As states placed limits on travel, business and regular outdoor functions — and in some places, as mentioned, surgical abortions — in the early weeks of the pandemic, the National Women’s Health Network saw a need for change. It started the #MailTheAbortionPill campaign in the first week of April to call on the FDA to not only lift its restrictions now, but also in a post-Coronavirus world, allowing medical professionals to mail the pill. Pregnant people then can “get the pill where they take the pill,” the campaign declares.

“It’s just crazy to tell people, ‘Stay home, don’t get on a plane, don’t go to work, but get in your car and travel hours each way to pick up a pill you can take at home,’” Pearson said. “That’s why we launched it in a hurry.”

While the campaign has yet to elicit a response from the FDA, it has helped bring about change in court. Last month, a federal judge in Maryland suspended the in-person requirement for the abortion pill during the pandemic, citing it as a “substantial obstacle” and allowing providers to mail it directly to patients, PBS News Hour reported. Pearson doesn’t take credit for the ruling — the National Women’s Health Network wasn’t a plaintiff in the lawsuit — but she believes their efforts, along with activism by the 21 attorneys general who organized a letter to the FDA and the Department of Health and Human Services requesting that the Trump Administration have no involvement in the REMS designation, added to the change in climate, affecting the judge’s decision.

The ruling was a win, albeit a short-term one, as the mail-in option will only be in place as long as there’s a public health emergency. Abigail Aiken, assistant professor at the University of Texas at Austin’s LBJ School of Public Affairs, is well-versed in the challenges women in Texas, especially in rural cities, seeking a medical abortion already faced before COVID-19, from how expensive it is (it’s not covered by most health insurance plans or Medicaid), to long travel time (96% of cities don’t have abortion providers), to overnight accommodations, to finding childcare. She was curious about the impact of the pandemic, a time when demand for abortion could be increasing due to financial instability, when one might struggle to get to or not even want to go to a clinic due to infection risk, when there were state bans on abortions (a policy move she called an “opportunistic attack on reproductive health”).

In a study recently published in Obstetrics & Gynecology, Aiken and a team of researchers found that COVID-19 and its barriers led more people to seek medical abortions outside of the formal healthcare setting, such as clinics and hospitals. Tracking data from Aid Access, an online telemedicine service where people can request and have a consultation for the medication abortion pill, which then gets mailed to them, found a 27% increase in the rate of requests across the US from March 20th to April 11th.

Requests to Aid Access nearly doubled in states with the most COVID cases and those that tried to restrict abortion. New York, which was the hot spot at the time, saw a 60% increase. Texas, which had banned all abortions for about four weeks, saw a 94% increase; however, there are explicit state laws barring medication abortion by telemedicine.

What’s so important about these findings, Aiken told Women’s eNews, is knowing that a remote medicine abortion model is possible. Just as dermatology has teleconsults, doctors in a clinic can prescribe the abortion pill and call it into a pharmacy. It’s how the United Kingdom responded to the pandemic — the region overhauled its policies and went fully remote, medical abortions included.

“We see the demand for these remote services, and yet we don’t have the policy environment that allows us to do it,” she says. “I’m looking ahead and wondering what’s going to happen with the REMS decision, how it’s going to change things. I think we might see changes in some places, but those state-level restrictions are going to have to change.”

The study’s data only comes from requests, however, and couldn’t hone in on how telemedicine abortions could disproportionately impact people of color and those in poverty, who are already marginalized and struggle to access abortion services.

“This cross between COVID and reproductive healthcare and racial inequity is an intersection that many of us have been living at for a long time and are grappling with for sure,” says Perritt. “My practice and the way that I provide care has always operated at these intersections, understanding that folks who are seeking reproductive health care are doing so in a vacuum. Decisions around whether or not to have a baby, to get pregnant, to have an abortion, or to use contraception are always grounded in the context in which people live. This moment in time, for so many of the folks that I care for in my community, is really a reminder that our lives are super complicated, and the things happening in the world, they shape the way we make decisions about our reproductive health, as well.”

All of these mandates, hoops and barriers are more likely to impact people with fewer resources. But COVID-19 is not the entity to blame for the threats to abortion.

“Certainly the COVID pandemic has exacerbated those things, but it’s important to understand that it didn’t create these barriers,” Perritt says. “The bigger threat to abortion access and clinic sustainability are these legislative practices that restrict care.”